Facebook has launched a new feature to keep a safety check on its users. Before the launch, around 1.35 billion users of Facebook can update their friends and family about their activities, life events, job, location, Interests like books, clothing, etc. Last Wednesday,  Naomi  Gliet- VP of Product Management, Sharon Zeng – Product Manager and Peter Cottle – Software Engineer announced the launch of the Safety Check feature for Facebook users to notify friends and family about their safety.

According to the company” During the situation of a disaster or crisis, people can switch to Facebook to check updates about loved ones. It is to facilitate the situation when communication is necessary for the users and their families both. ”

The feature is introduced to channel the communication between family and close friends in the case of natural calamity. By keeping, the earthquake and tsunami of 2011 in Japan as a reference. A team of Japanese Facebook engineers worked on a tool that keeps you connected with your family and friends in a disaster. According to Facebook, the tool will be activated for users who are believed to be in any affected area. It will automatically detect you using location via “Nearby friends” and the location where you have recently logged in. Then, a push message will be received by the user asking if you are safe. If you replied “YES”, then it will send a Facebook News Feed to friends and family. 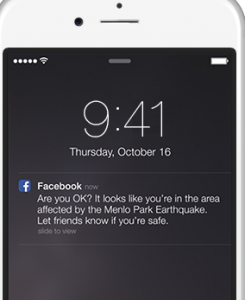 The tool helps to:

It is not the first time when a social networking site has launched some safety check feature for times of crisis. Twitter has launched Twitter Alerts to acquire crucial tweets from government agencies and notify its users using push messages. Another example is Google is using its Map Service to locate disaster relief “hotspots” during an event of a crisis.

I am a computer forensics Researcher, who has an interest in testing various software and perform experiments to carve hidden or lost data out of system. I also have a keen interest in reading network forensics.

View all of Eva Mendis's posts.